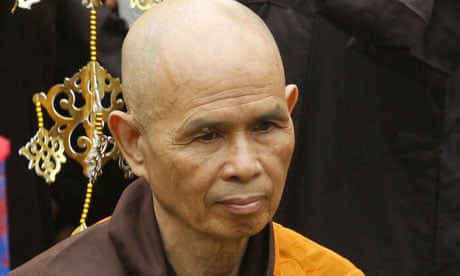 PHOTO: Vietnamese monk Thich Nhat Hanh has guided CEOs of some of the world’s biggest technology companies in the art of mindfulness. Photograph: AP

Mindfulness has become an increasingly popular topic among business leaders, with several key executives speaking publicly in recent months about how it helps them improve the bottom line.

In a blog post last month, Huffington wrote that “there’s nothing touchy-feely about increased profits. This is a tough economy. … Stress-reduction and mindfulness don’t just make us happier and healthier, they’re a proven competitive advantage for any business that wants one.”

But by focusing on the bottom-line benefits of mindfulness, are business leaders corrupting the core Buddhist practice?

Thich Nhat Hanh, the 87-year-old Zen master considered by many to be the father of mindfulness in the west, says as long as business leaders practice “true” mindfulness, it does not matter if the original intention is triggered by wanting to be more effective at work or to make bigger profits. That is because the practice will fundamentally change their perspective on life as it naturally opens hearts to greater compassion and develops the desire to end the suffering of others.

Sitting in a lotus position on the floor of his monastery at Plum Village near Bordeaux, France, Thay tells the Guardian: “If you know how to practice mindfulness you can generate peace and joy right here, right now. And you’ll appreciate that and it will change you. In the beginning, you believe that if you cannot become number one, you cannot be happy, but if you practice mindfulness you will readily release that kind of idea. We need not fear that mindfulness might become only a means and not an end because in mindfulness the means and the end are the same thing. There is no way to happiness; happiness is the way.”

To read the complete article please go to The Guardian.